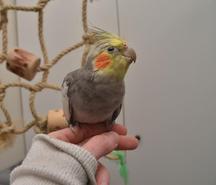 Cockatiels (Nymphicus hollandicus), are generally regarded as good pets or companion parrots, having a sweet demeanor, though this is by no means guaranteed. Like most other pets, the manner in which the animal is raised, handled, and kept has a profound effect on the temperament of the animal. Some birds are quite gregarious and sociable while others can be shy, retreating to the back of the cage when an unfamiliar figure appears. If handled often and if they have a patient owner the Cockatiel(s) will become tame very quickly compared to some of the other parrot species.

Cockatiels are generally kept in a cage and allowed to exercise and socialize with their owners outside of the cage for a few hours a day. In a specially prepared household environment, Cockatiels may be permitted to roam freely about a home or apartment, if the owner takes certain precautions, such as clipping the bird's wing feathers if the rooms have hazards that might pose a risk to the bird such as stoves, chimneys, toilets, or ceiling fans. But wing clipping is usually of a serious disadvantage to the birds and the procedure solely benefits the owner, since a wing-clipped bird cannot fly and hence are susceptible to household dangers such as being crushed against the door or under someones foot as well as being caught by predators like cats. The birds that retain their power of flight don't depend on their owner as much as wing-clipped birds since they are often able to properly avoid these hazards on their own; flight also gives the birds a sense of freedom and enjoyment that benefits both the owners and the birds. A scared Cockatiel will choose flight over fight, and may rarely injure itself accidentally. As a social bird, Cockatiels prefer areas with a lot of activity during the waking hours, and will return to a secluded area when it is time to sleep. Cockatiels may nap on or near their owners, including the owner's chest and shoulders if the owner is stationary for a long period of time.

Generally, well-socialized birds are gentle and friendly. Some Cockatiels enjoy physical contact, lending themselves well to taming. Many Cockatiel owners develop regular bonding rituals with their animals, engaging in preening, scratching, and even petting. A Cockatiel that wishes to be petted will often lower its head or nibble at the owner's fingers to indicate that it wishes to have its head and neck scratched (two places it can't easily scratch on its own), and will emit a low squeak to show its pleasure. Cockatiels which are hand-fed from a young age are more readily suited for physical contact.

Some birds will emit a distinctive 'hiss' when irritated, retreating or defending with pecking bites. This hissing may be coupled with the bird tapping its beak on a hard surface to generate additional attention while lowering its head and spreading its wings in a display of aggression.

Cockatiels do have a reputation for demanding attention of their owners on a regular basis. Their vocalizations range from soft cheeps to piercing cries, but they lack the screeching voice of other parrots; males are, however, louder than females. A Cockatiel permitted to roam freely will often seek out its owner, following him or her from room to room; or, if the owner happens to be outdoors, going from window to window to keep the owner in sight.

Tamed cockatiels require a consistent few hours of quality time per day with a person or in a person's company and a good night's sleep in an area with very little noise or distractions. Following a natural daylight schedule is the best arrangement for sleep, contrary to the popular belief that all birds must have 12 hours sleep each night. Another reason for allowing exposure to a natural dawn and dusk is that some birds will react badly to their cages being covered, or the light being switched off. In the wild, it would not suddenly become dark, and suddenly become light again, so when it does in captivity, some birds will get confused and scared and may start thrashing around in their cage.

If left on their own, quiet birds will make contact calls with their owners, that can be quite loud if the person is out of sight. Cockatiels can grow so attached to their owners that they may try to 'protect' them from anyone that tries to come near them, such as a partner or family member, by biting or hissing. By keeping Cockatiels in a shared household room, they are exposed to all family members equally and will not favour one person and feel the need to defend him or her as much. Cockatiels must be acquainted with the entire family, in order to assure even temperament toward all.

Although Cockatiels are part of the parrot order, they are better at imitating whistles than speech. They may learn to whistle different tunes. Although they can learn words, the only understandable parts of the words are the inflections, while the consonants are not easily discernible. Their whistles and other mimicking sounds such as 'lip-smacking' and 'tutting' are almost perfect imitations of the sounds their owners make. Some Cockatiels do learn to repeat phrases, though males are generally better at mimicry than females. It is said that some females cannot "talk" simple words and this is true, it mostly occurs in males. Cockatiel speech often comes out as a "whistle" when they do enunciate, the voice being soft in volume and difficult to make out. Cockatiels can mimic many sounds, such as the bleep of a car alarm, a ringing telephone, the sound of a zipper, the beeping of cell phones or microwaves, or the calls of other bird species such as blue jays or chickadees and loud weather like thunder. They can also mimic other pets such as dogs, occasionally barking back. Males have been known to mimic noises, words and sometimes other animals.

Although female Cockatiels are not often known to speak, this is not an absolute. Females generally don't imitate speech, but tend to mimic sounds such as telephones, washing machines, toilet flushes, and other household noises. Cockatiels that do imitate speech will usually mimic frequently heard phrases, particularly of the individual to whom the bird feels closest.

Cockatiels can also recognize sounds, such as the sound of the owner's vehicle as it parks nearby or the jingling of keys before one unlocks their front door.